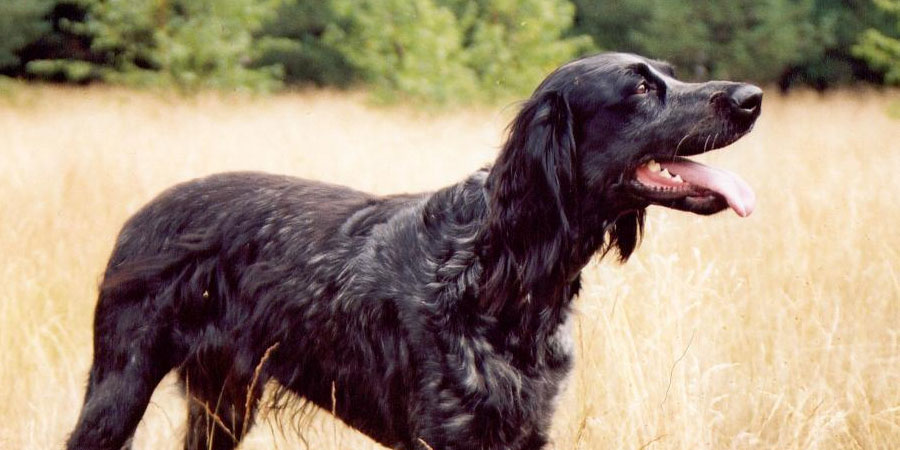 A Blue Picardy Spaniel on average is around 22–24 inches (56–61 cm) high at the withers and weighs 43–45 pounds (20–20 kg). Its coat is speckled grey black forming a bluish shade, with some black patches. The coat is flat or a little wavy with feathering on the ears, legs, underside and tail. It has long legs with some setter characteristics. It has a long broad nose and muzzle, with thick ears covered in silky hair that usually end around the tip of the muzzle. Its chest is of medium size that descends down to the same level as the elbows. Both the forequarters and the hindquarters are well muscled. Its tail typically does not extend beyond the hock and is normally straight. The breed has many similarities with the Picardy Spaniel due to the two breeds' recent history. The Blue Spaniel is described as being softer, as well as the obvious difference in coat color. The Picardy has a brown coat whereas the Blue Picardy has a black and grey coat, which was brought into the breed by the introduction of English Setter blood. Similar in the modern era due to the close similarities of the two different breed standards. In addition, the Blue Picardy is a little faster, and has a slightly finer nose.

It is a versatile hunting dog, used for its ability to locate and retrieve game in harsh and adverse terrain and conditions. It is not specialised to any one type of terrain, and tends to score well in field trials. The Blue Picardy is considered to be a quiet breed, but requires a great deal of exercise as it has a high level of stamina. It loves to play, and is a responsive and obedient breed which thrives on human companionship. It is especially good with children.