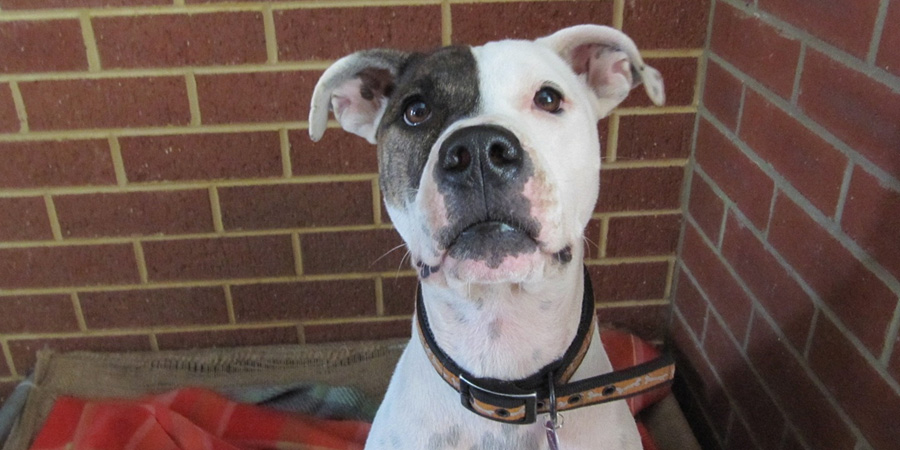 The Bull Arab is symmetrical and well-built all over. The head and muzzle are strong and powerful, moderate in length in proportion to the face. The eyes are bright. The color of the eyes depends on the coat color. The teeth meet in a level bite. The full drop ears are moderate in size. The strong neck is slightly arched, moderate in length. The chest is not too big, nor too shallow. The strong, straight back is in proportion to the height and is not too long, not too short. The muscular hindquarters are straight when viewed from behind, and well angled when viewed from the side. The oval feet are close knit with arched toes. The tail’s length is in proportion to the body, thick at the base and tapering to a point. The coat is smooth and short. In colder weather there may be a soft undercoat. There is no feathering on the tail or legs and the dog has no double coat appearance. Most dogs are predominantly white with patches of colors, often with ticking on their white patches. Coat colors include liver (with a red nose), black, red, buckskin, blue, silver, tan and brindle.

Bull Arabs were originally bred for hunting purposes and were specially developed to pull pigs to the ground and hold them by the ear. Like many other breeds of dogs Bull Arabs are now highly valued as superbly loyal family dogs. Several attacks on people in several states of Australia have been allegedly attributed to the breed. Reports supplied by 80 New South Wales councils and passed on to the Department of Local Government, between 1 July 2005 and 30 October 2006, detail several attacks attributed to Bull Arabs, yet show many other breeds with a greater number of attacks.