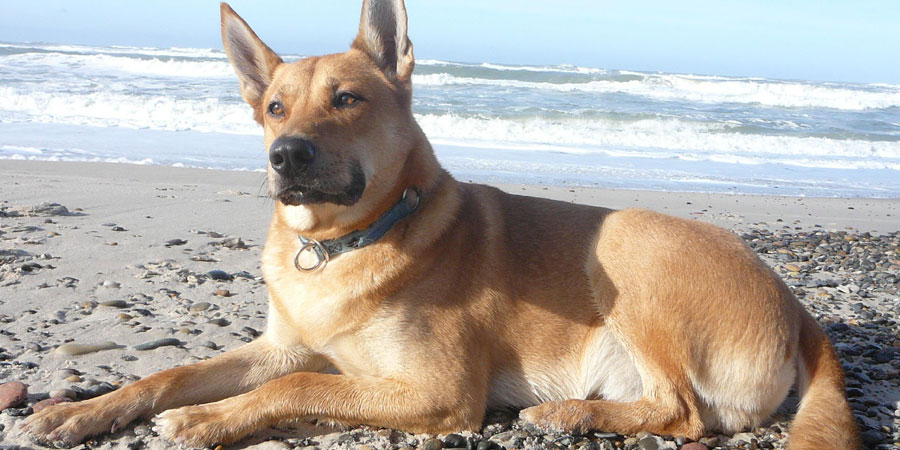 The Carolina Dog is a dog of medium build, possessing the general appearance of a small jackal or wolf in combination with many features of a small Sighthound. The distinctive features of the breed are those that confer survival advantages under free-living conditions in the tall grassland savannah and bottomland swamp forest habitats of the South, southeastern, and Southwestern United States. The dog typically has a medium-length straight back, with a distinctive waist which sets off a deep brisket from a highly tucked-up loin. The tail is distinctive in both its fish-hook-like configuration and its variable carriage, depending on mood. The medium to large, usually upright ears and long, graceful neck are also distinctive and suggest the appearance of a small, versatile and resourceful predator, well adapted to surviving on its own in a natural habitat. In ideal conditions, a Carolina Dog should appear thin and tight. It is not inappropriate, for example, for the ribs to show slightly as in a well-conditioned racing sighthound. Individuals that are greatly overweight should be severely penalized. The dog is to be shown in a natural condition, with little or no evidence of grooming or scissoring. Whiskers are not to be removed.

Carolina Dogs are natural runners. They have excellent noses that help them hunt wild animals, when in the wild. When kept as pets, the breed requires moderate exercise and sufficient space. They need to be exposed to a lot of social activity from a young age. Once they are trained enough, they are said to make excellent family dogs.