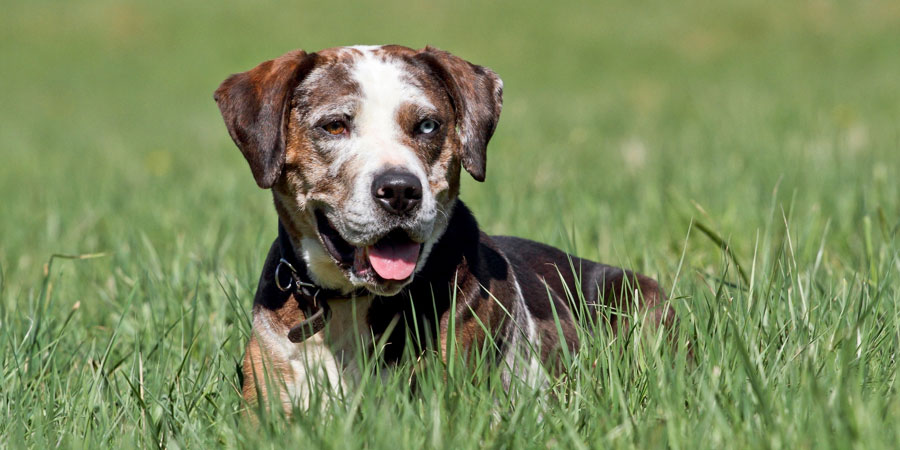 The Louisiana Catahoula Leopard Dog is a medium to medium-large, short-coated dog, with a broad head, small-to-medium drop ears, and an undocked tail set on as a natural extension of the topline. The Catahoula is well muscled and powerful, but not bulky, giving the impression of agility and endurance. The Catahoula is a moderate breed and should not resemble either a sighthound or a bulldog in appearance. The body is just slightly longer than tall and the distance from the elbow to the ground should equal 50-60 percent of the dog’s height from the withers to the ground. Because of the breed’s name, many people assume that all Catahoulas have the so-called “leopard” markings and blue eyes. In fact, the breed is noted for its many and unusual coat colors and patterns, as well as varied eye color. The Catahoula should be evaluated as a multi-purpose working dog, and exaggerations or faults should be penalized in proportion to how much they interfere with the dog’s ability to work.

Catahoulas are highly intelligent and energetic. They are assertive but not aggressive by nature. Catahoulas in general are very even tempered. Males tend to be more obnoxious than females, but Catahoulas are very serious about their job if they are working dogs. They make a good family dog but will not tolerate being isolated, so interaction with the dog is a daily requirement. When a Catahoula is raised with children, the dog believes that it is his or her responsibility to look after and protect those children. Many owners will say that the Catahoula owns them and they can be insistent when it's time to eat or do other activities. Catahoulas are protective and a natural alarm dog. They will alert one to anything out of the ordinary.