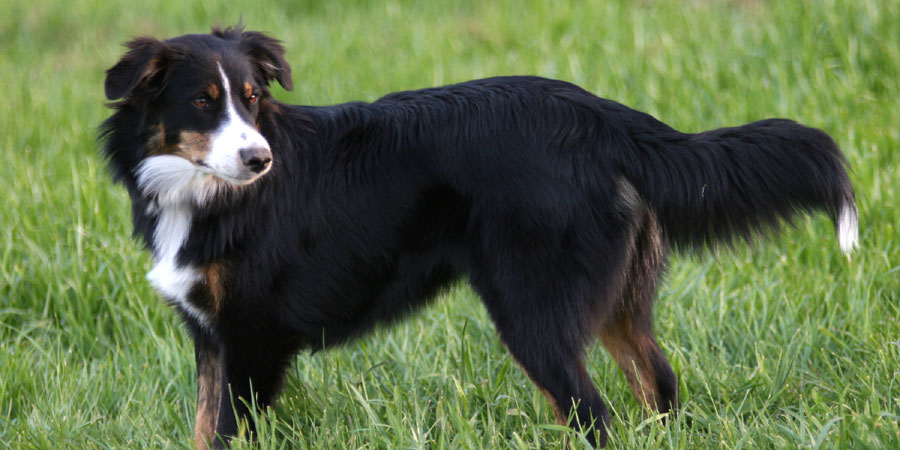 Farm Collie (This name is also used for the Scotch Collie)

English Shepherds are similar in appearance to Border Collies and Australian Shepherds. English Shepherds usually have tails and a less rounded head than many Aussies. English Shepherds are never merle as Aussies frequently are. They are generally not square in body like an Aussie. English Shepherds tend to be larger than Border Collies but are most readily distinguished from Border Collies by their very different upright, loose-eyed herding style. The coat is medium length and can be straight, wavy, or curly. There is frequently feathering on the legs and tail, as well as on the ear. As a working dog, the coat should be easy to keep, requiring very little grooming. Dirt tends to just fall away. English shepherds tend to shed quite a lot and fur may be found on and under furniture, clothes, and carpeting. The primary coat colors are: sable and white (clear and shaded), tricolor, black and white, and black and tan. Other variations such as solid dogs of any color, piebalds, and red nosed tricolors and sables also exist but are not common.

The English Shepherd temperament is the defining characteristic of the breed, with high intelligence and often a unique type of kindness for those in his home, both animals and people. The English Shepherd is often an independent worker. English Shepherds are adaptable and learn routines quickly. Some can be watchful of strangers and are more one-person dogs. However, once he accepts people or children or stock as his own, there are few better caretakers than an English Shepherd. The English Shepherd frequently exhibits an independent, bossy or "enforcer of the rules" streak in his temperament. If the dog's desire to enforce order is not channeled and directed to a suitable end by a strong, confident leader, he may exhibit many undesirable behaviors. Nevertheless, English shepherds can thrive as companion dogs in environments that provide sufficient mental and physical stimulation.