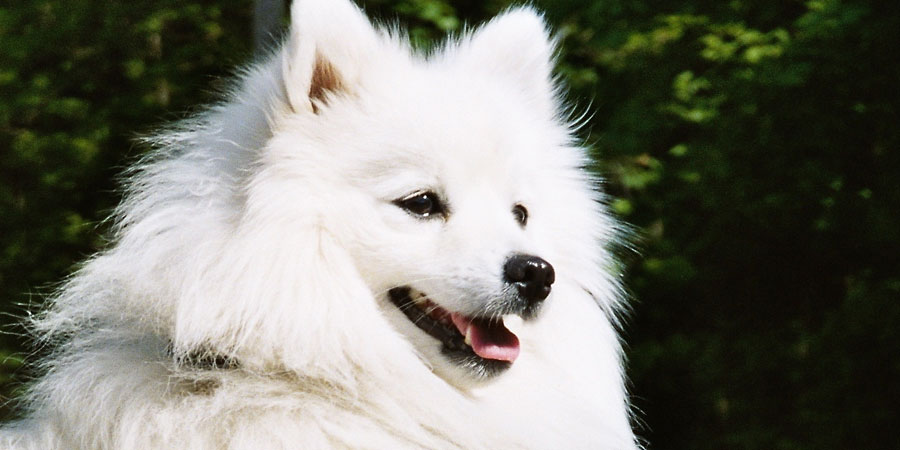 The Japanese Spitz is a small dog, around 33 cm (13 ins) at the withers, with a somewhat square body, deep chest, and a very thick, pure white double coat. The coat consists of an outer coat that stands off from the soft inner coat, with fur shorter on the muzzle and ears as well as the fronts of the forelegs and the hindlegs. A ruff of longer fur is around the dog's neck. It has a pointed muzzle and small, triangular shape prick ears (ears that stand up.) The tail is long, heavily covered with long fur, and is carried curled over and lying on the dog's back. The white coat contrasts with the black pads and nails of the feet, the black nose, and the dark eyes. The large oval (akin to a ginkgo seed) eyes are dark and slightly slanted with white eyelashes, and the nose and lips and eye rims are black. The face of the Japanese Spitz is wedge-shaped. They share a common resemblance with the white Pomeranian dog, Samoyed and American Eskimo Dog.

Active, loyal, and bright, the Japanese Spitz are known for their great courage, affection and devotion making them great watchdogs and ideal companions for older people and small children. Most Japanese Spitz are good watch dogs, despite their relatively small size, and they have a tendency to bark to warn of arriving strangers. The Japanese Spitz is first and foremost a companion dog and thrives on human contact and attention, preferring to be a member of the family. They are known as very loyal dogs. They enjoy being active and love to be in the outdoors. They are intelligent, playful, alert, and obedient, and particularly excellent and loving toward children. Unlike many other dogs, the Japanese Spitz will customarily have his or her tail flipped onto its back. In some cases this is thought to be dominant behaviour, but in the Japanese Spitz case this is normal bearing.