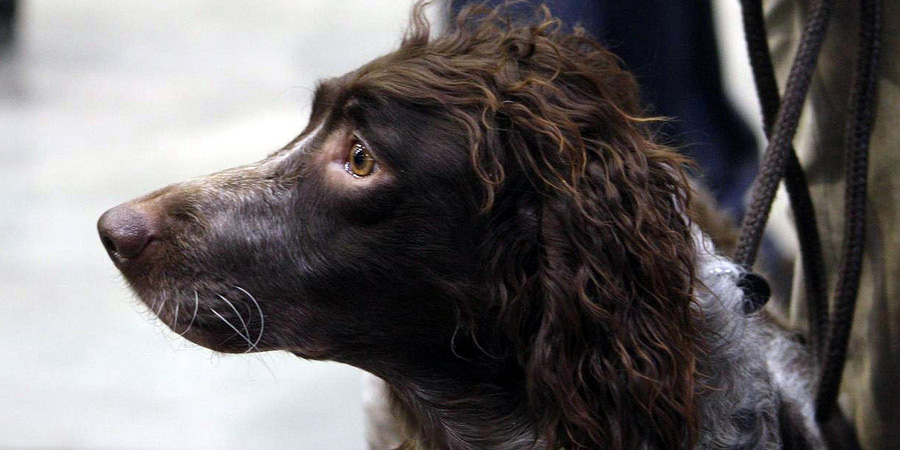 The Pont-Audemer Spaniel is a medium-sized dog, weighing 44 to 60 pounds (20–27 kg), and standing around 50–58 centimetres (20–23 in) at the withers. It is different from most sporting dog breeds in the USA and UK in its length, and the pointed quality of the muzzle.The Pont-Audemer Spaniel's coat is curly or, at the very least, quite wavy, but smooth around the face. The most common pattern is brown and white roan but a solid brown coat is also acceptable. Both coat patterns can have red-brown “dead leaf glints”. Black or tan markings are faults. The hair on the face is short. The topknot can take up to five years to fully develop. Most Pontos have docked tails. Tails that are left intact are usually well feathered like that of a setter, although it is not unheard of for a Ponto to have the shorthaired “rat-tail” of an Irish Water Spaniel.

Though hardy, as well as hard-working, the breed has the typical spaniel traits of being easy to train, gentle, and affectionate. The dogs are known to have a fun-loving quality and in France are said to be le petit clown des marais (the little clown of the marshes). Pont-Audemer Spaniels are usually found in a working gundog environment, and are rarely kept as mere family pets. The dogs specialize as water dogs. At the start of the 20th century they were prized for their use in hunting wild ducks in either the water or marshy conditions. They remain used in France in various terrain, and used for hunting rabbits or pheasants.