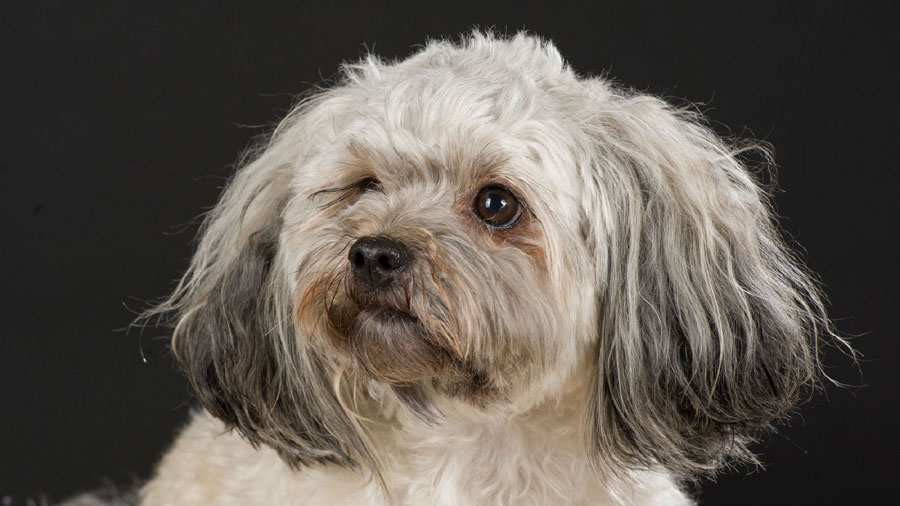 Bolonki are 18 – 27 cm high at the withers and 2-4 or 5 kg in weight. The Bolonka bodily formation resembles a square, with a long coat that has big wavy curls. The Bolonka is moderately boned and should never appear fine-boned. The Franzuskaya Bolonka is white, while the Tsvetnaya and Zwetna are black, brown, gray, red or wolf-gray. The breed is known for its soft, wavy to curly coat in a variety of colors. They have ears that are neither too long nor too short. Male Bolonkas have a distinct beard and moustache that sets them apart from their female counterparts. Bolonka tails are supposed to have the tip touching the back. Similar to other Bichon breeds, Bolonki do not shed. Daily brushing of the coat helps to prevent matting. If a Bolonka's coat gets severely matted, they may develop a hematoma. Bolonka dogs are considered suitable for people with allergies, as they are bred to be hypoallergenic. Breeds that don't shed are more likely to be hypoallergenic, since the dog's dander and saliva stick to the hair and are not released into the environment. The frequent trimming, brushing, and bathing required to keep the Bolonka looking its best removes hair and dander and controls saliva. It is important to note that how hypoallergenic a particular dog is for a particular person may vary with the individual dog and the individual person.

The Tsvetnaya Bolonka is even-tempered, intelligent, friendly to all, and should never be shy or show aggression of any kind. The Russian Tszvetnaya Bolonka was specifically developed as a companion dog and is prized for its sociable, easy-going and affectionate temperament. Its specimens will avoid exuberant games and won’t appreciate any extent of physical abuse during playing. The Bolonka Zwetna usually perceives all unfamiliar people as potential play mates and without timely socialization it can grow into an inappropriate greeter. However this breed was bred with strong tendency to defend its territory and its favorite humans, so it can become a fairly good watchdog. The Bolonka won’t be able to apply to necessary aggression when the situation calls for it and shouldn’t be tasked with the responsibilities of a guardian.