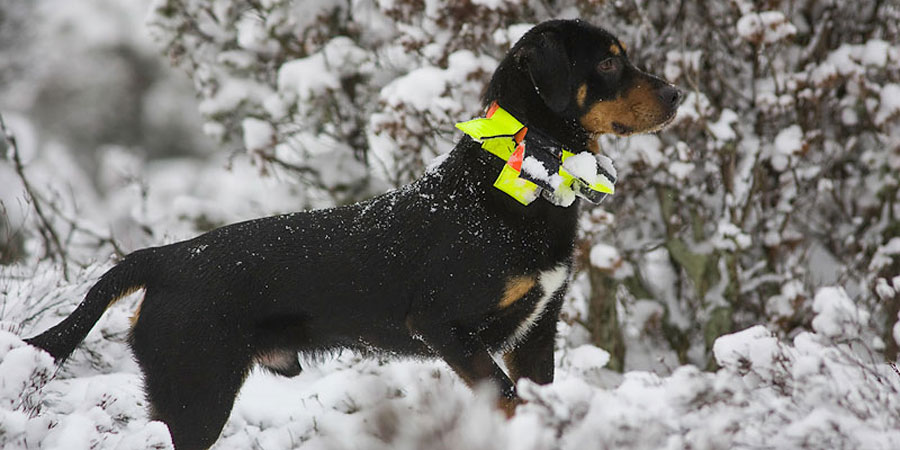 Often confused with the Rottweiler breed due to common coat coloring, the Smålandsstövare is the oldest scent hound breed native to Sweden.They have a medium length top coat with a shorter, dense undercoat; longer hair grows on the fringed tail and thighs. The most common coloring of the breed is a mostly black coat with tan markings, although the markings can range in color from shades of amber to a reddish brown. They have a tough, robust body which is compact and almost square in shape. It is the smallest of the Swedish hounds,[8] on average they measure between 16–21 inches (41–53 cm) at the withers with males being slightly larger than females. Average weight is around 33–44 pounds (15–20 kg) for both genders. The Smålandsstövare has a natural bobtail due to this being specifically bred into the breed, and a typical member of the breed should be well muscled in proportion throughout. The facial features include wide nostrils on a black nose, the jaw closes in a scissors bite and the eyes are typically dark brown. The skull itself is lean with a well defined stop. The ears have rounded tips, and are set fairly high on the skull, hanging flat down the sides.

A popular Swedish hunting dog, members of the breed can form strong attachments to their master; but are also seen as household pets due to their gentle and protective nature. In hunting, they are used to drive the quarry for the hunter. They are a highly intelligent breed, and require a high level of exercise. They therefore are not best suited to living in a small apartment. Smålandsstövare are wary of strangers and can be territorial, but this can also make a Smålandsstövare a good watchdog. Participation in field trials for Smålandsstövares are becoming increasingly common. They remain active up until around twelve years old.